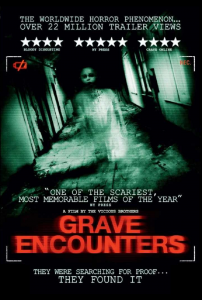 Found footage, the concept of using discovered footage left behind by dead or missing protagonists, has been around in horror since it was used in Cannibal Holocaust in the 80s. After The Blair Witch Project’s cinema release in 1999, there has been a resurgence of this style of film in horror, pushed further along in 2007 by Paranormal Activity and Spain’s [REC], which was remade in the US as Quarantine in 2008; the same year, Cloverfield was released.In 2011, Canadian filmmakers The Vicious Brothers released Grave Encounters, a low-budget indie film that manages to capture the fear that is possible with this style of movie.

Read the whole review at: